skip to main | skip to sidebar

Catching up is hard to do !


Ah, the price we pay when trying to catch up ! Well, I will just pretend that I am not behind at all, of course I am only wishing that I had been more consistent in my blogging. This year just came and went and I do know where and how, so no regrets there. Last time I posted was in early spring when  I was butchering an heirloom pig. Well there was another pig this summer ( a Red Wattle this time) and its Prosciutto is already looking good. To that we can add the fact that my friends Ken and Barbara just finished crushing Chardonnay and Old Vines Zin grapes so 2013 is already looking good. I  will also do a fund raising dinner called "Save the grapes " to purchase netting to protect the vines against the birds who have become a real problem and make the bringing of grapes to maturity almost impossible. Looking at Ken sitting helplessly watching the birds dive bombing on his grapes was heartbreaking as he works tirelessly on his vines and has been at it for seven years and let's not forget the blistering Texas heat. 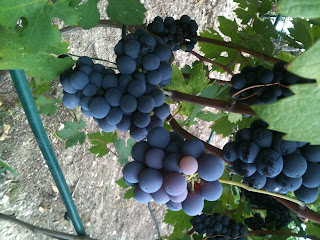 Now these are good looking Cabernet Sauvignon grapes from Lungavista Vineyards so when it comes down to it, the birds can fend for themselves on other things. Let's see what else happened this year; I travelled to South Korea for the World Chef's Congress where 75  Chefs got sick from the food ! Me included, now I have heard all the jokes but it was not funny and I'll spare you the details , needless to say it was not worth the investment . Also had a great serie of cooking classes well attended till the end as the location ceased to exist because of horrendous rent. My teachings have been on hold since July when I start devoting 100% of my time to my EWMCS culinary team training and getting ready for the IKA Culinary Olympics where we competed in early October and won a bronze medal. It was the fruit of seven long months of meetings, testings, tryouts, long commutes and basically put our normal lives on hold for months. Was it worth it ?  ABSOLUTELY ! The experience, the pride, the honors and the accomplishment itself were hard to imagine but  we all pulled through and apply the true meaning of the word TEAM. Can't wait for our wrap up dinner this week.
In between there was a couple of trips where I presented a couple of seminars on charcuterie and after a stint on jury duty this week I will head home to Southwest France for a month where the house need attention and spend time with  family and friends.  I said it before I know but stay tuned.
Posted by Chef Andre at 10:45 PM

Chef Andre
A Chef by trade I am and always have been. Now a Chef instructor and loving all that goes with it. From the research to the preparations to all the new and not so new things that I learn during the process; also the people I get to meet and the bunch of new friends I get to make.